Build a groove box with Arduino Due, Post1 : Software/Hardware

The goal is to build a groovebox using the last Arduino : Arduino Due.
The processor is a 32 bit ARM3 cadenced at 84 MHz, and it has a Digital-to-analog output.
http://arduino.cc/en/Main/ArduinoBoardDue

It can easily generate sound at 44 kHz. The DAC is 12 bits. It's a little less than nowadays audio products, but it corresponds to 80-90's products like first yamaha or akai samplers. The sound is a little more "compressed", but still used in modern music.

The FatLib library gives Arduino quick access to SD card. It's quick enough to read samples. So the groovebox will have a sampling part, to generate beats from one-shot samples, and a synth part, to generate bass, chords and leads.

I could start this project by inspiring on RCArduino Blog, by Duane B. (a very good blog on arduino), and this particular post :
http://rcarduino.blogspot.com/2012/12/arduino-due-dds-part-1-sinewaves-and.html

Here are some demo of what is possible to do with groovuino. (it's just a proof of concept, not a very musical song) :
http://groovuino.blogspot.fr/2013/05/groovuino-groove-box-demo.html
https://soundcloud.com/gaetino/groovuino


First of all, let's make a C++ library with main objects like sampler, oscillators, filters,...

With this, you can load and play wave files on a SD card plugged on SPI.
(you can have a look here :
http://playground.arduino.cc/Learning/SDMMC
http://arduino-info.wikispaces.com/SD-Cards )

If you include sampler.h, make sure you have previously imported SdFat.h in your main program.
First, I define a structure corresponding to the header of a wave file : "wave_header".

Then I create a sampler class. Through this class, you can load and read a wave file byte by byte.

In your main program, you will have to create a loop called 44000 times per second. I will call it the 44 kHz loop. You can do this by defining a timer. See timer.h file.

- init()
Initialize data. Must be called in setup() function of main program.

- splay(volume, note)
Sampler play. Start to play the sample previously loaded, with a certain volume and pitch. (note that pitch is not coded yet)

- load(samplename)
Loads the sample file (must be a .wav file). It can read mono or stereo file (a stereo will be transformed to mono), at 44 kHz and 16 bit. The wave header is read, and all data is loaded in the structure.

- sstop()
Sample stop. Just stop the reading of the sample.

- notestop(note)
Stops the sample corresponding to a certain note, and start the decreasing of the sample volume (because of certain samples which do not end on a 0 volume, I had to make a little decreasing enveloppe to the end of the sample reading, to put the volume to 0 without earing a "click").

- setVol(volume)
Set the volume of the sample.

- buffill()
Loads the buffer data, with wave data. The buffer value is actually 1024, you can adjust it to what you want. (data "bufsize").
This function must be called at very high rate, in a different loop than the one which is playing the file (a timer, or main loop). There is 2 buffers. One is being played by output() function, and the other must be loaded prevently. If it has not been loaded yet, the function loads this buffer while the other is being played.

- next()
Prepares the index of the buffer to be read. Must be called just before output() function, in the 44kHz loop.

- output()
Returns a 12 bit integer corresponding on the sample played. Must be called in the 44 kHz loop.

With this, you can define and play an oscillator.
It will be based on reading a wavetable. For now, I just defined some basic wavetables in the memory of Arduino. But later, we will be able to load any wavetable from SD card. It should be a wave file with 600 samples.

You must play the osc in the 44 kHz loop.

- init()
Initialize data. Must be called in setup() function of main program.

- setNote(note, volume)
Set the note and volume of the oscillator (for example data coming from MIDI NoteOn)
The note is corresponding to normalized MIDI data :


- stop()
Indicates that the osc is no more playing (correponds to MIDI NoteOff). Even if it's the enveloppe which stops the sound of the osc (and not the method stop()), it's important to call it, to indicate to other methods that the sound is no more playing. Important for the glide, for example.

- setVolOsc(osc number, volume)
Set the volume of the chosen oscillator.

- setWavform(osc number, waveform number)
Set the waveform of the chosen oscillator.
For now, I just put 5 waveforms, but the goal will be to choose waveform files from the SD card.

- setFine(osc number, fine tune)
Set the fine tuning of the chosen oscillator.
Fine tuning will be between -0.5 to +0.5 pitch

- setGlideTime(glide time)
Set the glide time in milliseconds. (1 to 1280)

- next()
Prepares the index of the buffer to be read. Must be called just before output() function, in the 44kHz loop. Increments or decrements the glide if necessary.

- output()
Returns a 12 bit integer corresponding to the sample of waveform playing. Must be called in the 44 kHz loop.


Contains methods to initialize timers.
See here the discussion about timers on Arduino Due :
http://arduino.cc/forum/index.php?topic=130423.0

- startTimer(Tc, channel, irq, frequency)
Start the timer on a chosen channel and irq, at a defined frequency in Hz.

- setTimerBPM()
Set the timer frequency, calculating it from general bpm.


This class defines an ADSR enveloppe. The data out will be a volume which you'll have to multiply to the sound you want to control (oscillator or sample).


- init()
Initialize data. Must be called in setup() function of main program.

- start()
Start the enveloppe. Must be called when a MIDI noteOn event, for example.

- stop()
Stop the enveloppe. The sustain phase is ended, but from the moment you call this method, the release is beginning.

- amount()
Returns a 19 bit data which is the volume of the current state of enveloppe. This function must be called in the 44 kHz loop.


For the first program design, we won't care about effects (filter, chorus, etc...). Let's make simple.
The groove box will first have a 3-osc mono synth and a 3 polyphony sampler.

Here is the schema: 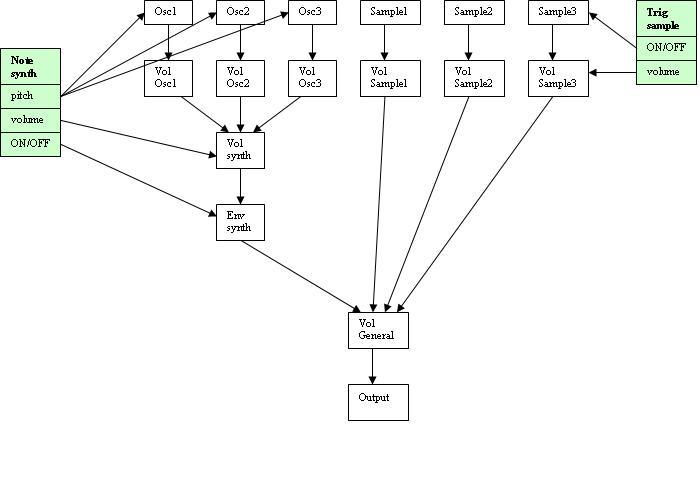 
Let's make a pannel. This one is not good, but it's enough to test ergonomy : 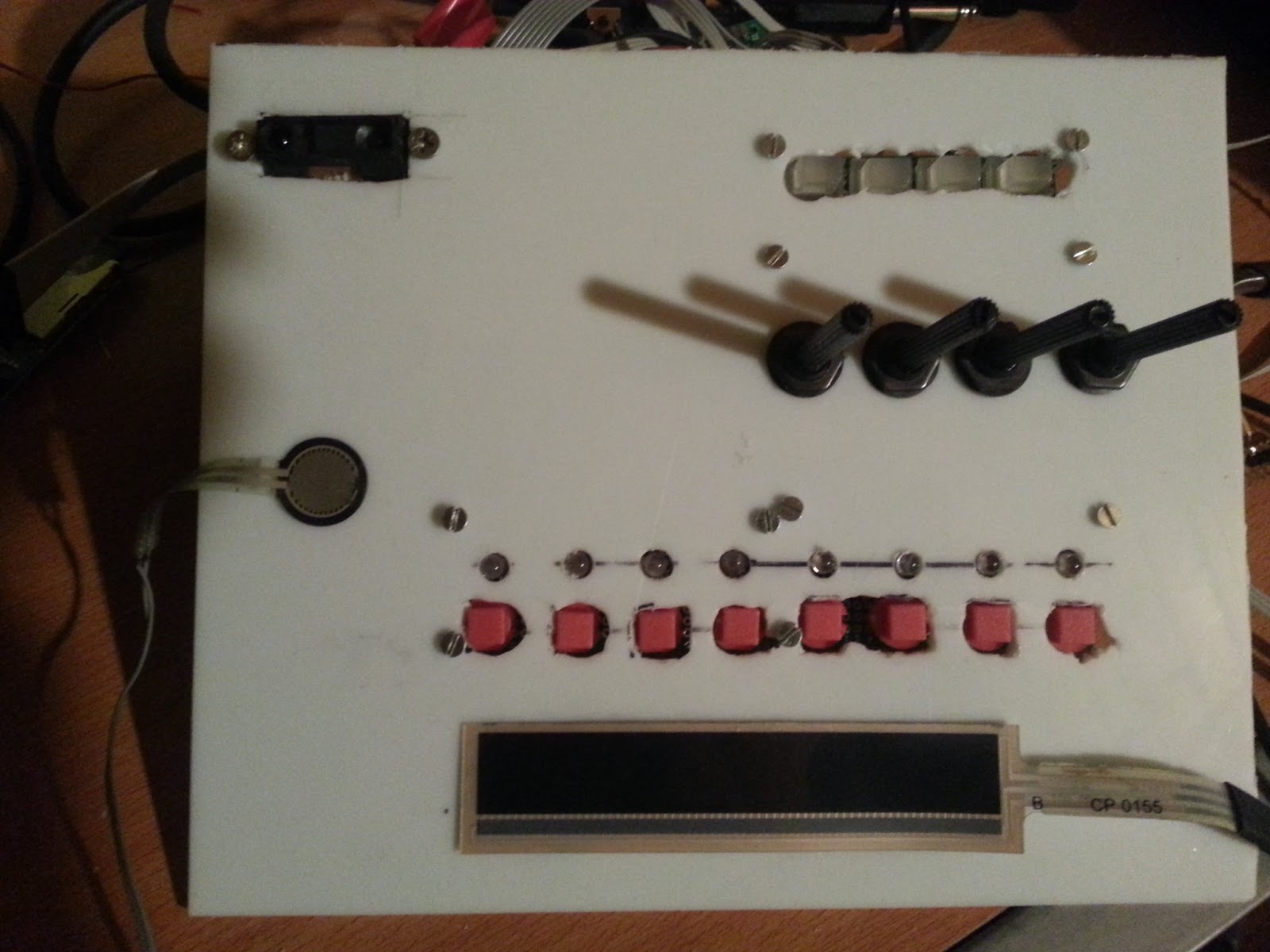 Connections and other stuffs :
1 MIDI IN
1 MIDI OUT
1 Audio OUT
1 USB plug (the groovebox will be powered by USB)
1 SD card reader

The pannel was made in plexyglas.

You have to use RX and TX connectors of Arduino Due.
Be careful that nothing is sent to Arduino by a MIDI controller when loading the firmware in the Due.
Here are the schematics from MIDI Breakout board nicely published by Sparkfun. I used these to make my own board. (Or you can buy the board to Sparkfun) : 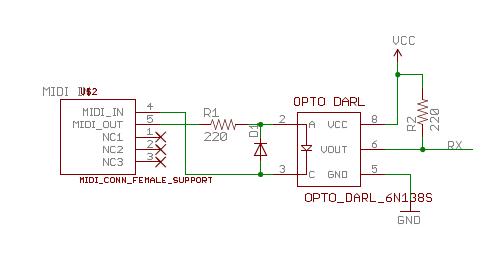 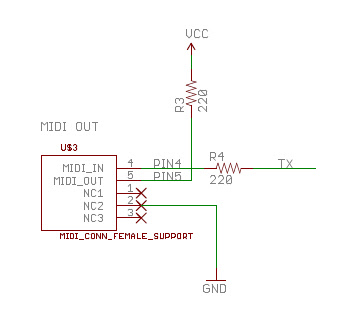 
Connections are arduino basics. Digital pins are connected like this :
http://arduino.cc/en/Tutorial/DigitalReadSerial

You can connect them to pins 22-30 for exemple.

If you have 3.3V LED, you can connect them directly between digital pins and ground. If not, don't forget to add a resistor.

Have to read 4 potentiometers, and 3 sensors. 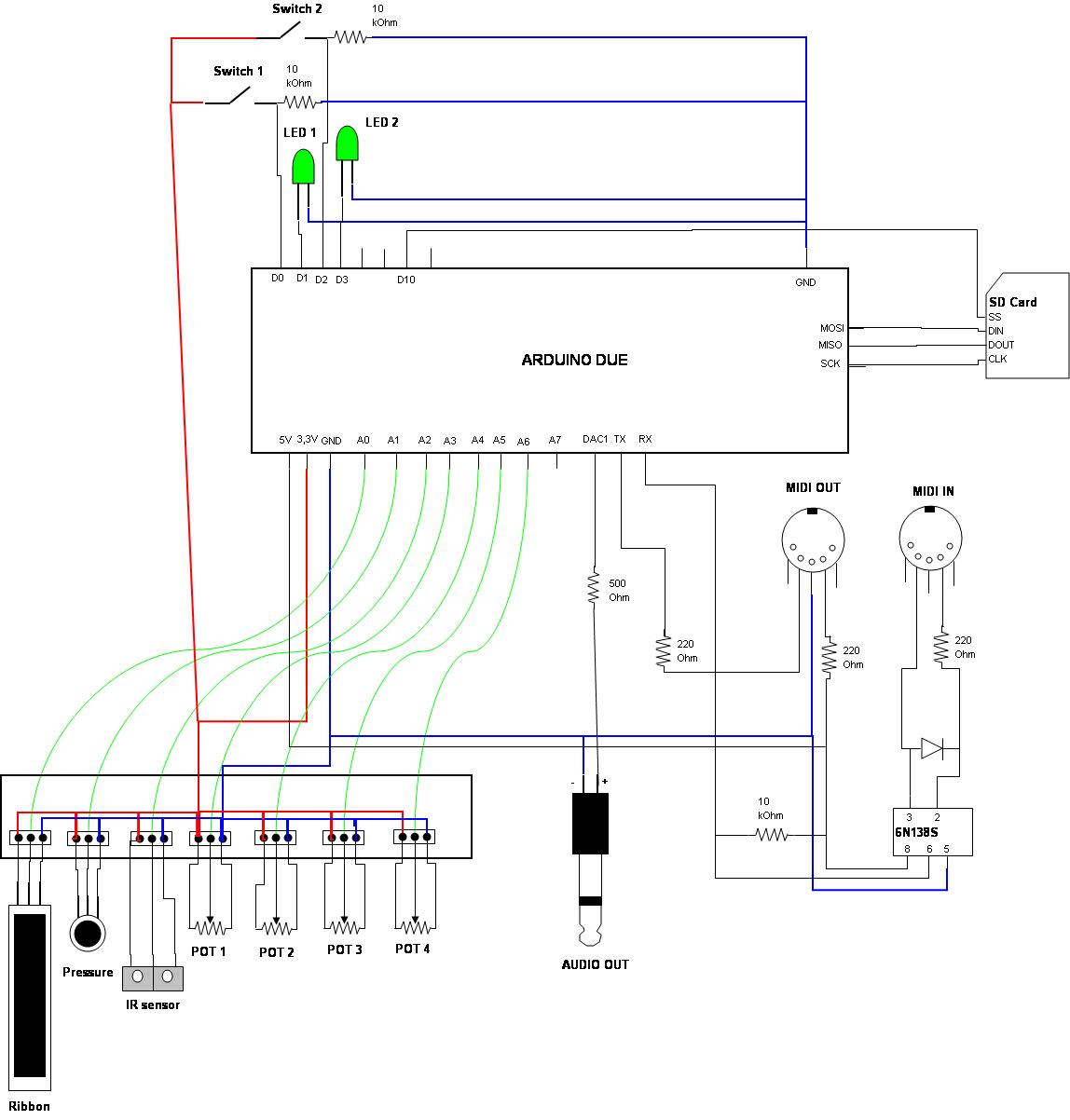